It has been one year since Katie and I returned from our amazing adventures, one year since Gibsons Go Global officially started. It seems like it was just yesterday, but at the same time it seems like a lifetime ago. No one could have prepared us for what God called us to do. It was definitely a learning process God was teaching us and training us along the way as He does with all of those who are walking in obedience.

In New York, we learned the importance of the one and the power of prayer. God sent us there for one person — my friend Zach and to pray for the city. Would God send us to the largest city in the US to minister to one person and pray??? Was anyone else in that city able to do what we did???

When we arrived in Norway, our perception of what would happen was slightly different. We focused heavily on the one, Kjetil, and this led us to be able to minister to a small home group of six. Here, we learned the importance of spiritual heritage, and that we cannot sit back and wait for the enemy to attack. We must press forward in our Godly heritage as warriors to take back the land of the enemy that rightfully belongs to the Son who bought it with His sacrifice. 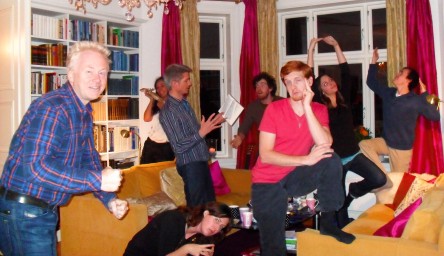 The invitation to Scotland came out of nowhere, but God was ready to put us to work with Gary and Vanessa Irvine. Here, we learned that the light of God was shining all over the world and the importance of coming together in unity to accomplish the work of the Lord!!! We were able to see even more clearly, the global revival that God is positioning His people to carry out.

Praying at Stirling House of Prayer in Scotland

Already having several contacts in England, we quickly launched into many diverse ministries out of more than three different churches. Vicar Robert and Pastor Sam set us up to be able to minister in prison, on the streets, in churches, prophetic conferences, pastors meetings, pray for healings, and prayer walk the city. We also developed some key lifelong relationships and learned the value of creating family in foreign cultures.

Returning to Spain where we first started our courtship was amazing for a rest and reconnecting with each other and good friends like Pastor Alfredo, Danny, and Jose Maria. Even here, we learned how God was moving like a wind across the land bringing revival. We got the privilege of sharing words in several churches, groups, and youth in various settings.

An unexpected trip to Kosovo yielded some great time to rest and refresh and yet here, God was still teaching and molding us for things to come. We learned of the true power of forgiveness and restoration and the value of perseverance to see the fruit that God is bringing forth. We did less ministry here, but got the opportunity to encourage and pray for several missionaries and a local pastor Imir.

With friends in Kosovo

Our trip to India yielded the most visible fruit. Prakash hosted us and setup ministry and invited us to minister with other visiting teams. We returned to be with Pastor Daniel and teach a YWAM DTS as well as a gathering of pastors in his hometown. God even allowed us to travel to the far Northeast and meet Maremi and minister to the Miso people. God opened blind eyes, set people free, and healed and saved so many people.

Preaching at a leper colony in Dharmapuri, India

It was difficult getting into Cambodia, but God had us here during the hottest season to speak to Both’s church and encourage the leaders at the YWAM base in Batambang. It was great returning here and being able to give back once again to the Khmer people and missionaries alike.

With Pastor Timothy and his wife in Battambang, Cambodia

Australia was our last foreign place to visit and here God was continuing to teach us and train for what was to come. We got to minister to a deeply spiritual people and speak truth to many who had strange spiritual concepts. We were able to minister with Kevin and YWAM Byron Bay as well as encourage some new friends in Brisbane before our trip home. 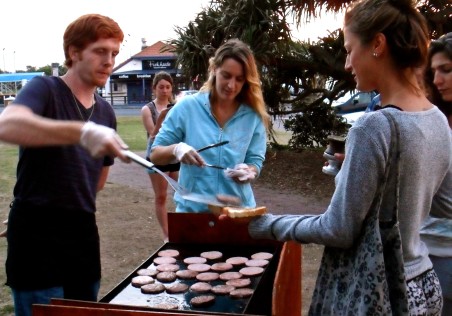 Returning to the US, we did not stop ministering as we stopped in Hawaii to see old friends in YWAM and speak life to family near San Francisco. One year ago today, we finally returned home.

Now, we are waiting. After so much teaching, training, and growing that God did in us, we are ready to spread the fire of revival even more. We have continued in every way that we can. Speaking to family, friends, churches, and even strangers about how awesome our God is. God has opened some doors, but we desire to be used so much more. Now, we are waiting, but definitely not idle. It is hard to be idle with an eight week old, but even now God is using him to open doors to minister.

We do not know what is next or what doors are opening to us as you may not either, and that is okay. I encourage you to be faithful to God and continue to use everything you have to serve Him. Give yourself completely to Him, grow in the waiting time, and He will do the work to propel you into all that He has for you!!!

It’s been about a month since we arrived back to Texas. The 9 month-long faith journey we were on has ended and we have now begun a new one! Here is our newsletter update for the month of June. We pray that you are encouraged by what the Lord is doing! here in the U.S. Please pray about partnering with us as this new chapter of our lives begins. We would love to sit and share with you all that God has done in us and where He is leading us next. Please contact us if you are interested in getting together or having us speak. 🙂